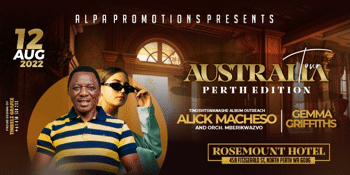 Rosemount Hotel (North Perth, WA)
Friday, 12 August 2022 8:00 pm
2 days away
18 Plus
Music
Send this event to
Alick Macheso who is going to be performing is an award winning Zimbabwean based artist who has 12 studio albums under his belt. He is one of the best music exports that Zimbabwe ever had and he will be performing with Gemma Griffiths. Alick recently launched his new album with a full packed crowd of over 10k.

Gemma is a Zimbabwean musician based in Cape Town, South Africa. She came to be known in Zimbabwean mainstream with her music in mainly Shona and English. In 2019, Griffiths featured of highly successful Winky D song MuGarden which was number 1 for a long time.