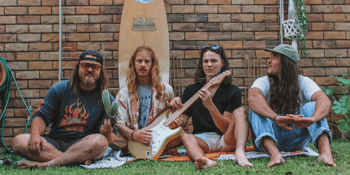 with special guests DICE, Flower Fiction & Sprinter
Rosemount Hotel (North Perth, WA)
Friday, 3 June 2022 8:00 pm
5 days away
18 Plus
Indie
Rock
Send this event to
Following their triumphant return to Australia, today Lazy Ghost announce their biggest national tour to date, in celebration of the release of their new single ‘Told Ya So’. After many years spent playing abroad in Canada, Lazy Ghost have relocated to Australia to dive into their already established following within the Australian music scene. Their music tonality stems from their love of indie tones and surf rock tempo.

Supporting bands abroad like Ocean Alley gave them a sense of what home feels like. Lazy Ghost brings an energetic live show that connects with the audience. Lead singer Kyle Leeming, originally from the Byron Shire, NSW, formed the Band in Whistler, Canada in 2016 after buying his first guitar to ignite his love for music and meeting the very first formation of the band. The band grew into local sensations. They played their original tunes to snow surfing punters from all over the world. They've experienced back to back successful Australian tours in 2018 and 2019, all thanks to their hard hitting Green Out EP that was directly influenced by Australian Surf Rock tunes and all round good times. Since then, Lazy Ghost released their full length album “Snacks” and a successful string of Singles including “What a Time It’s Been” during Covid lockdowns. This single secured their sound, offering a blend of exceptional tonality and lyrics straight from the feels.